I’m going to keep these to two month posts I think to account for the “dry spells” and reduce the possibility of a very short post!

So as promised, in this post we have some quite unusual items that I’ve acquired (I know! More unusual than HeliFire I hear you say!).

The first item was something I saw on eBay in Japan and bought due my desire to add a Nintendo Red Tent to my collection. Unfortunately, it’s not a Red Tent, but a nice little book/ guide about the Red Tent: 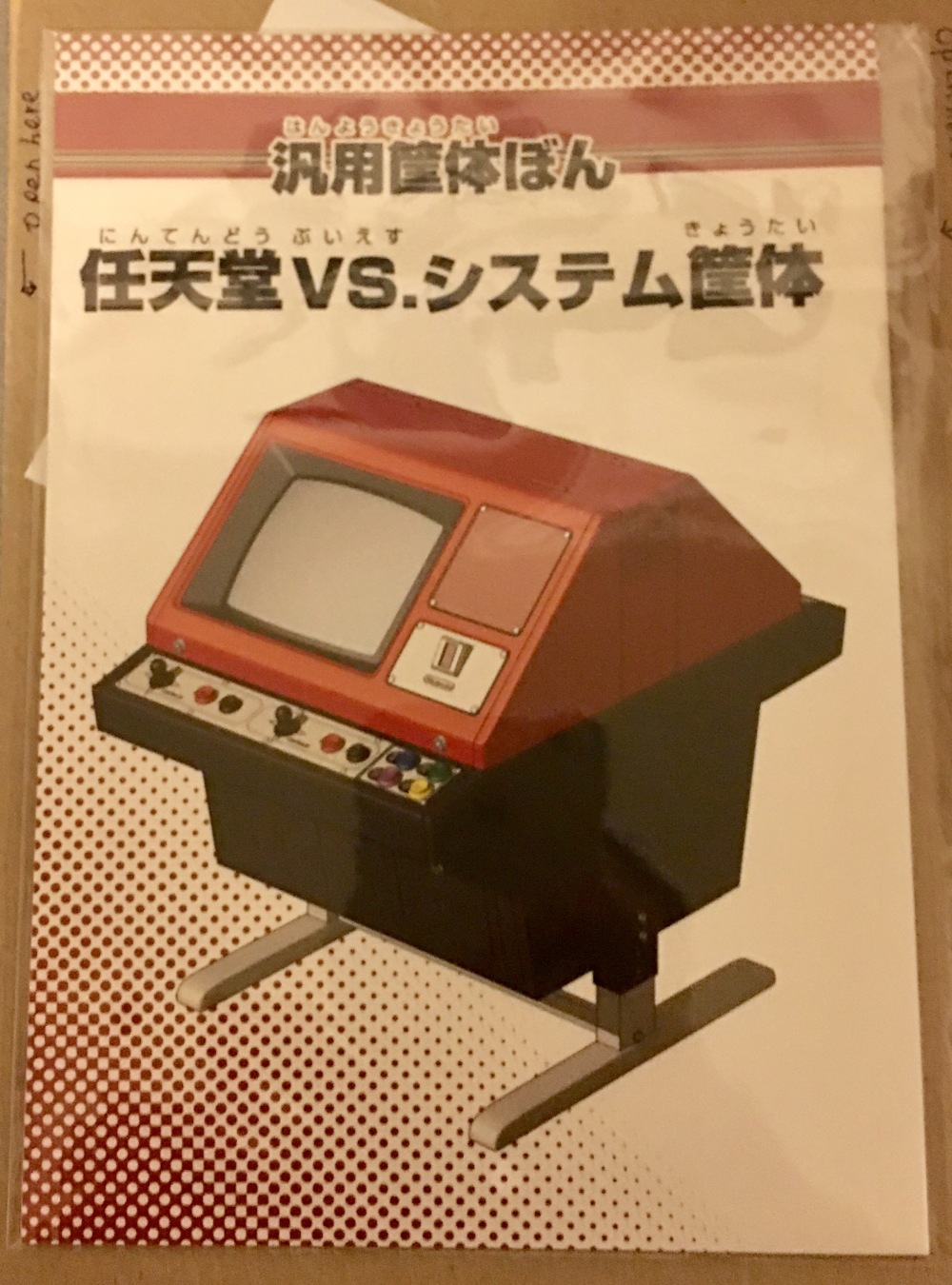 I just loved the look of it and picked it up without really knowing what it was. When it arrived (quite speedy, for International post!) it turns out it’s sort of a third party user guide to the Red Tent with lots of instructional picture guides (good considering I don’t speak or read Japanese!).

The mentioning of Japan leads me nicely on to my next delivery. Some months ago I purchased a Popeye cocktail from CoinOpWarehouse with the intention of converting it to a Donkey Kong Jr cocktail. I even bought a new serial plate for it from someone breaking one in the US: 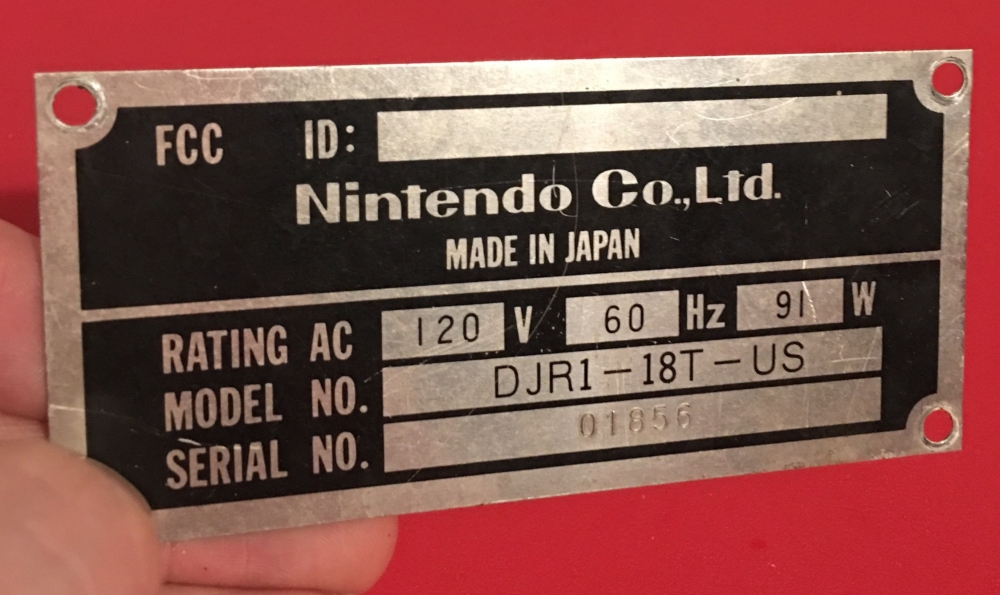 Then on one of my many perusals of the internet, I came across an image of a flyer that piqued my interest: 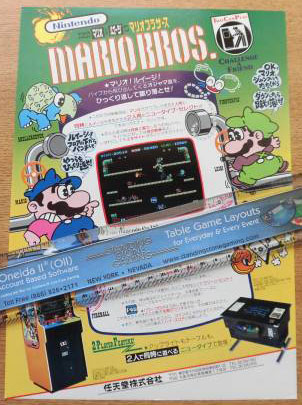 It turns out that in Japan, they released a Mario Bros. conversion kit for the cocktail cabinets: 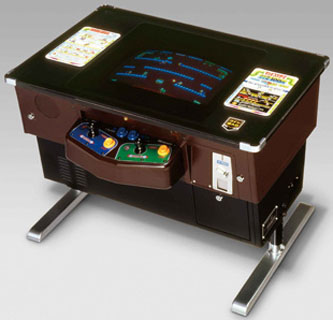 Mario Bros. was a game that I wanted to add to my collection and in my quest to collect unusual cabs, this I decided was the solution! The plan seemed simple… import a donor cocktail, source the necessary parts and success! Now, I appreciate that this was a little short-sighted, as not only are there no known examples of this cocktail within the confines of the internet that I have searched, nor are there any parts. So, my next step was to post on a couple of forums with my intentions and see if anyone else had seen any parts (or artwork). This turned up some very interesting results as a top guy called Rich had sourced high res. scans of the artwork, but gave up after failing to source a control panel. He sent me copies of the scans and also kindly posted me the original version of one side of the artwork he’d bought from Japan. I had the scans he sent translated by a friend of mine and had some English versions made up: 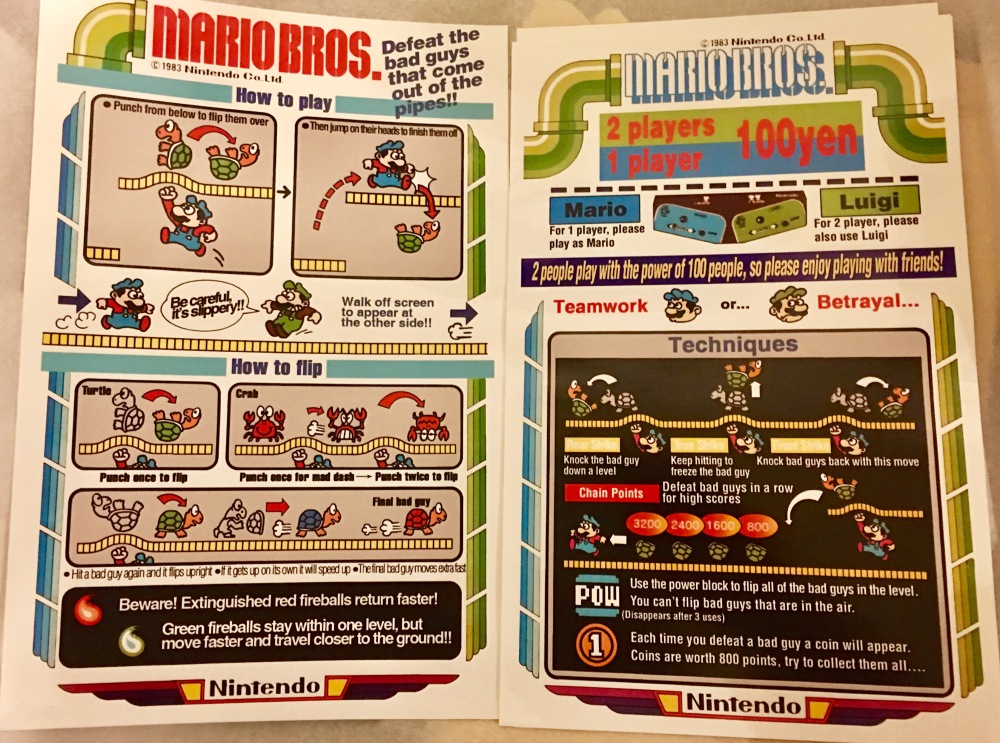 In the same forum thread, another member popped up mentioning that he had one of the control panels! I messaged him asking if he was willing to part with it and how much he wanted. He very kindly asked me to cover the cost of postage and said I could have it for nothing!! A few days later the parcel arrived: 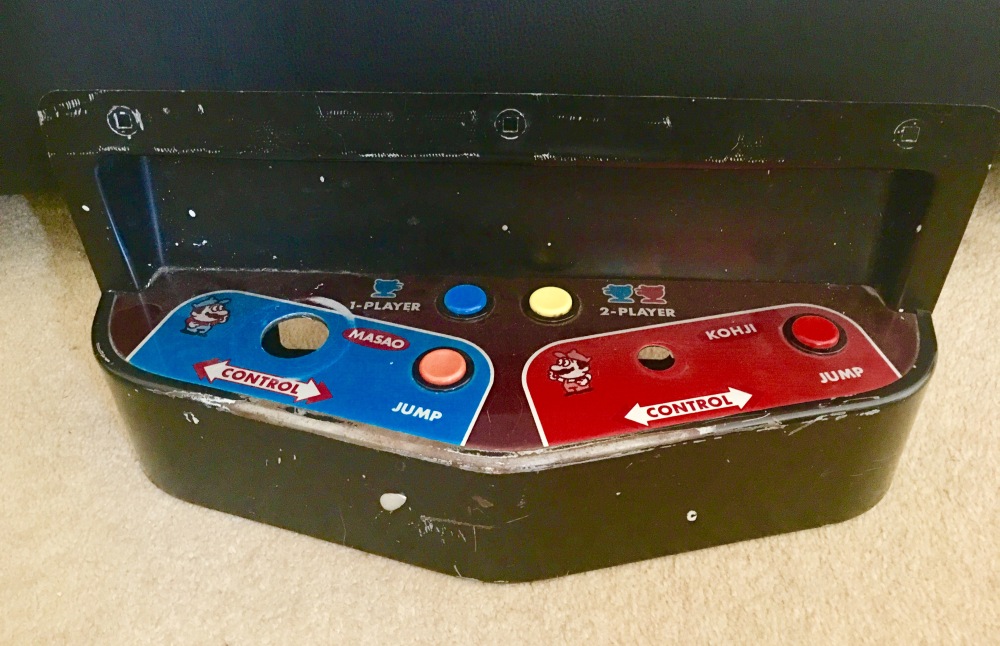 This was the most important piece of the puzzle as without this, the project wasn’t going to get off the ground. I’ll cover more of this when the project starts.

The next parcel isn’t the most interesting, but an essential delivery to placate my obsession for originality. The two Nintendo uprights I imported last year were both missing the original light fixture for the marquee and these proved difficult to source. I dropped lucky with an eBay auction and a US forum and sourced a pair within a few days (after not seeing any for months!): 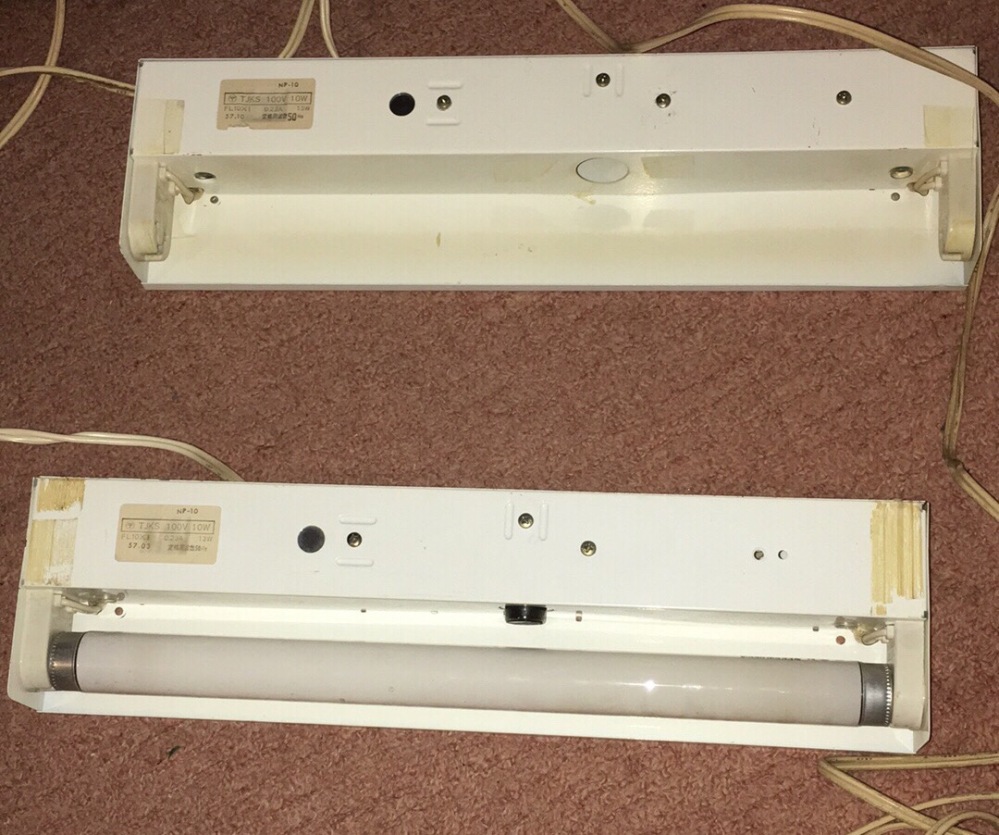 This next parcel was a completely unnecessary purchase (because clearly all of my purchases are “necessary”…), but it was an interesting piece given its back story:

It may look like a normal Donkey Kong marquee, but it’s actually one of the very first marquees produced. This is identified by the lack of any copyright message, which is normally found under the “KONG” of Donkey Kong. I especially like the licensing sticker, which despite its unfortunate placement, adds to its authenticity.

Now, the final delivery wasn’t purchased by me, but for me by a very kind soul :). In my slight obsession with the history to the Nintendo arcade phenomenon, I have read many things about how Nintendo first entered the market. The one well documented hicccup was the first big entry into the US market. After the success of Radarscope in Japan, Nintendo America ordered a big consignment of Radarscope cabinets to sell in the US. Unfortunately, the game didn’t take as well in the US and Nintendo were left with a few thousand cabinets that they couldn’t sell. To shorten a long story, this dilemma lead to the creation of Donkey Kong by Shigeru Miyamoto, who at the time was a young artist working for Nintendo. He was tasked with converting the unsold units to Donkey Kong in order to recoup costs. This lead to a number of Radarscope boardsets being converted by Nintendo to the first Donkey Kong boards and they are identified by the coding TKG2: 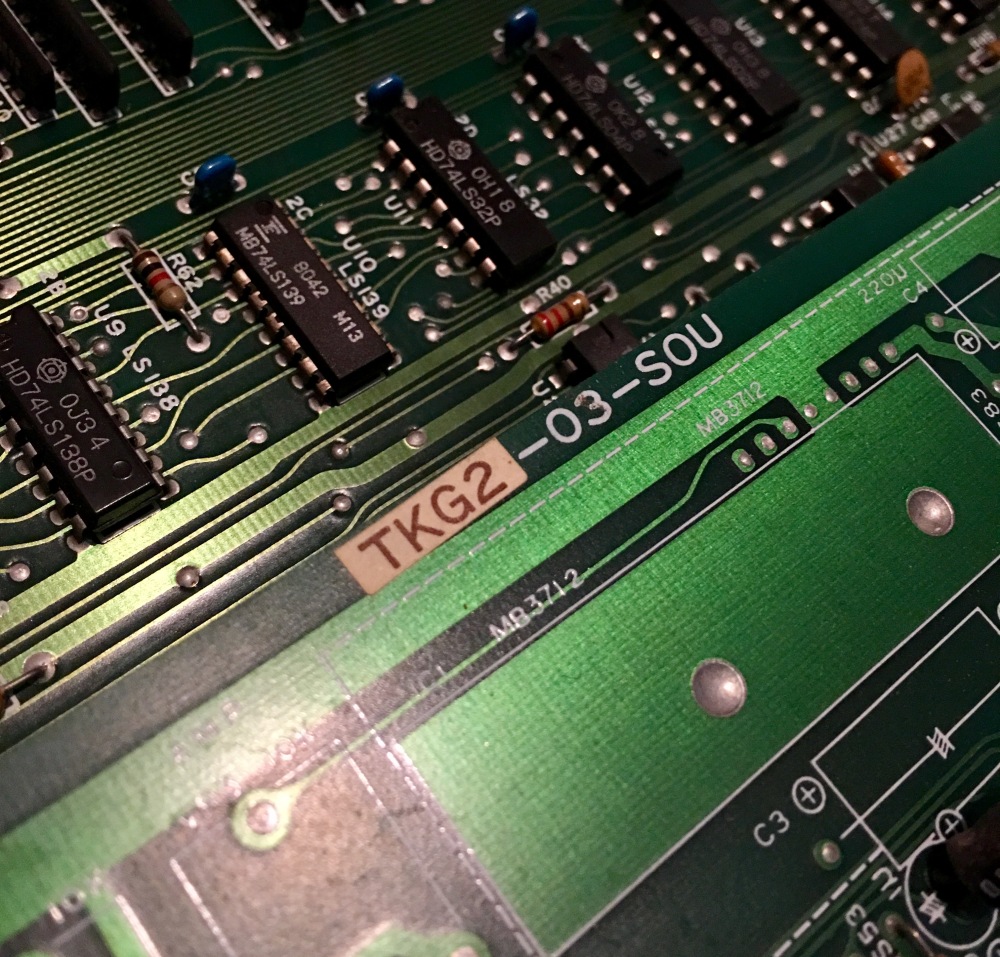 I love this board just for its place in history and its back story. Unfortunately, at the moment it doesn’t work (despite being sold as working…), but even in its current state I love it!

I said I’d keep these posts short and to the point, but I seemed to have gone off on a tangent a couple of times. I don’t mind too much as some of the deliveries require a bit of background (especially considering how unusual they are).

So I’ll leave it there for now. There’s definitely one delivery in September that I’m excited to share; but I know something else is arriving in October, so I’ll do another two month post in the not too distant future.