Now it’s been a long while since I’ve had an update for HeliFire, aside from some small purchases (replica artwork).

As my cocktail arrived “non-working” I’ve continuously browsed the internet in a vain attempt at picking up some spares. I know I’ve managed to pick up buttons and coin boxes, but anything HeliFire specific seemed like an impossible feat.

In one of my many eBay browsing sessions I spotted a completed listing for a working HeliFire board! I’m not sure how, but I’d missed it by a matter of days. I contacted the seller to see if he had another one, however unlikely that would be. To my surprise he came back saying he did have another, but wasn’t willing to part with it as it was his last one.

Skip to ten months later, I’d been to Revival in Walsall and played HeliFire on Alex Cowley’s dedicated cocktail. Despite owning the game since May of last year, I’d never played the game. I fell in love with the it and decided I needed mine up and running. I set on browsing eBay again and decided to message the seller from last year again to see if he’d changed his mind. I dug through all my previous messages (no small feat on eBay) and pinged him a message to see if he still had the board (and if we wanted to part with it). Whilst I waited for a reply, I thought I’d have a look at his current listings and luck be have it, he’d started listing boards for sale again.

To cut a long story short, I ended up buying a Radarscope 4 boardset off the seller (although it arrived without ROMs or CPUs…) and the HeliFire board, which I’d seen photos of it working! 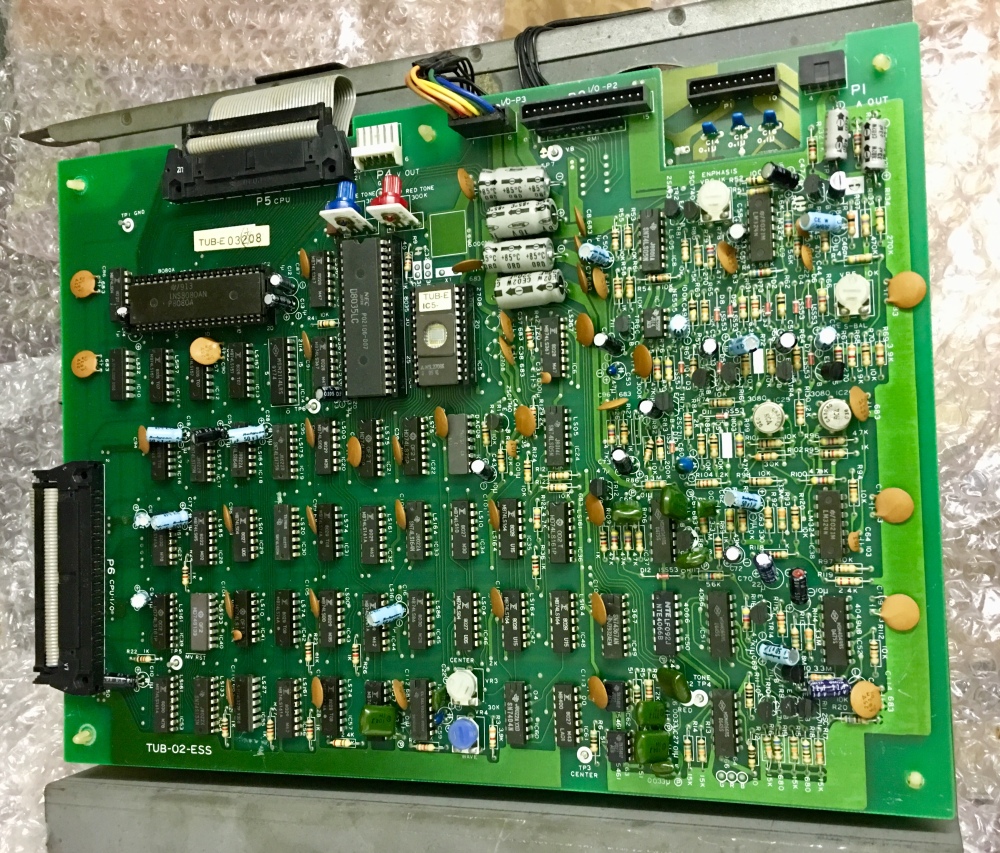 The HeliFire board arrived missing one of the rainbow interconnect cables for the sound board (I knew about this), but as Radarscope wasn’t going to be up and running anytime soon, I borrowed the one off that boardset.

So I dug out the HeliFire cocktail cab and started getting to work wiring everything in. As the original PSU wasn’t outputting all required voltages I wired up a switcher (partially using an ArcadeShop Nintendo power board): 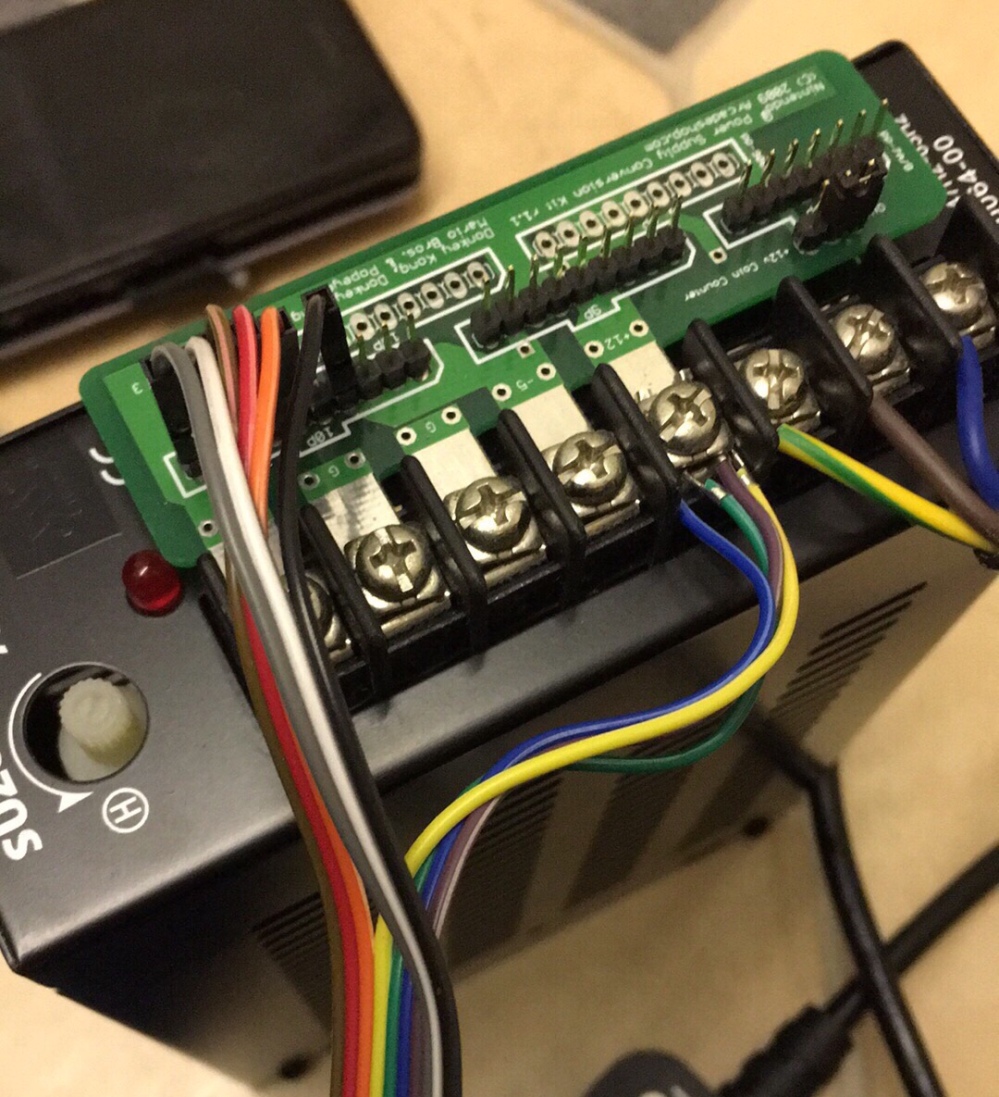 The 9P power connector in the HeliFire cocktail matches the DK one so that was easy, but the 10P connector was very different, so that required some “custom” work.

I connected everything up and fired her up! I was met with something unsuspected…

It was black and white… it’s supposed to be colour. Now when I was putting the board back in I noticed two of the boards had a connector to accept the monitor cable. I unplugged the cable and swapped it over to the other board (ESS board) and we had colour! 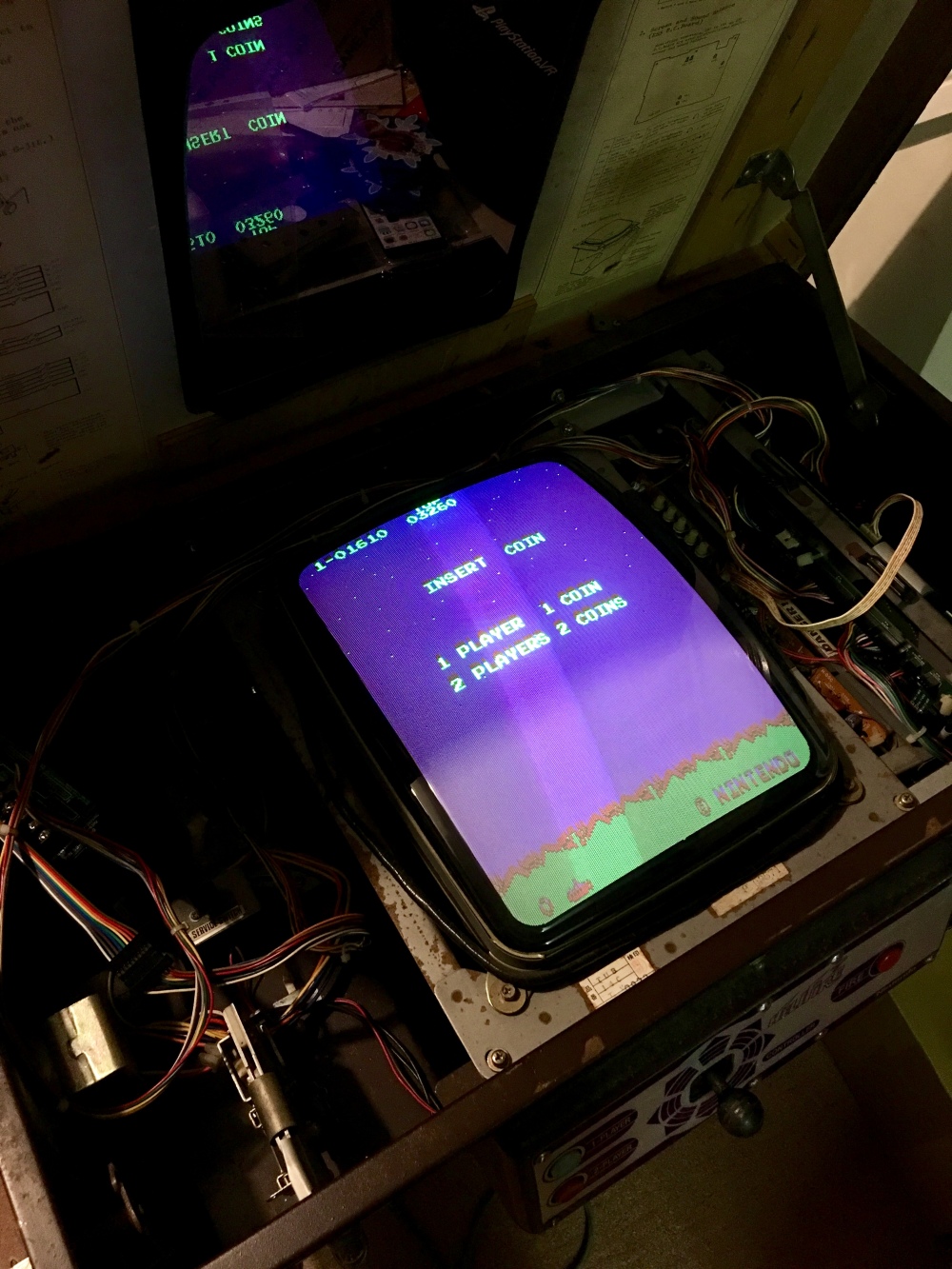 Now, not the right colours, but also no waves to show where the sea stops and the sky begins. I began playing with all of the pots to see what I could adjust. There are the pots on the monitor, but these only adjust the screen size, brightness and volume. On the ESS board there are 6 pots that all control different things, including two coloured pots (one red and one blue). This wasn’t easy with the boardset in the cocktail, but luckily the boardset I bought came with a spare ESS board so I could use that for reference whilst trying to make adjustments inside the cocktail. After lots of tweaks and adjustments, I was getting nowhere, so decided to have a few games and come back to it the next day. 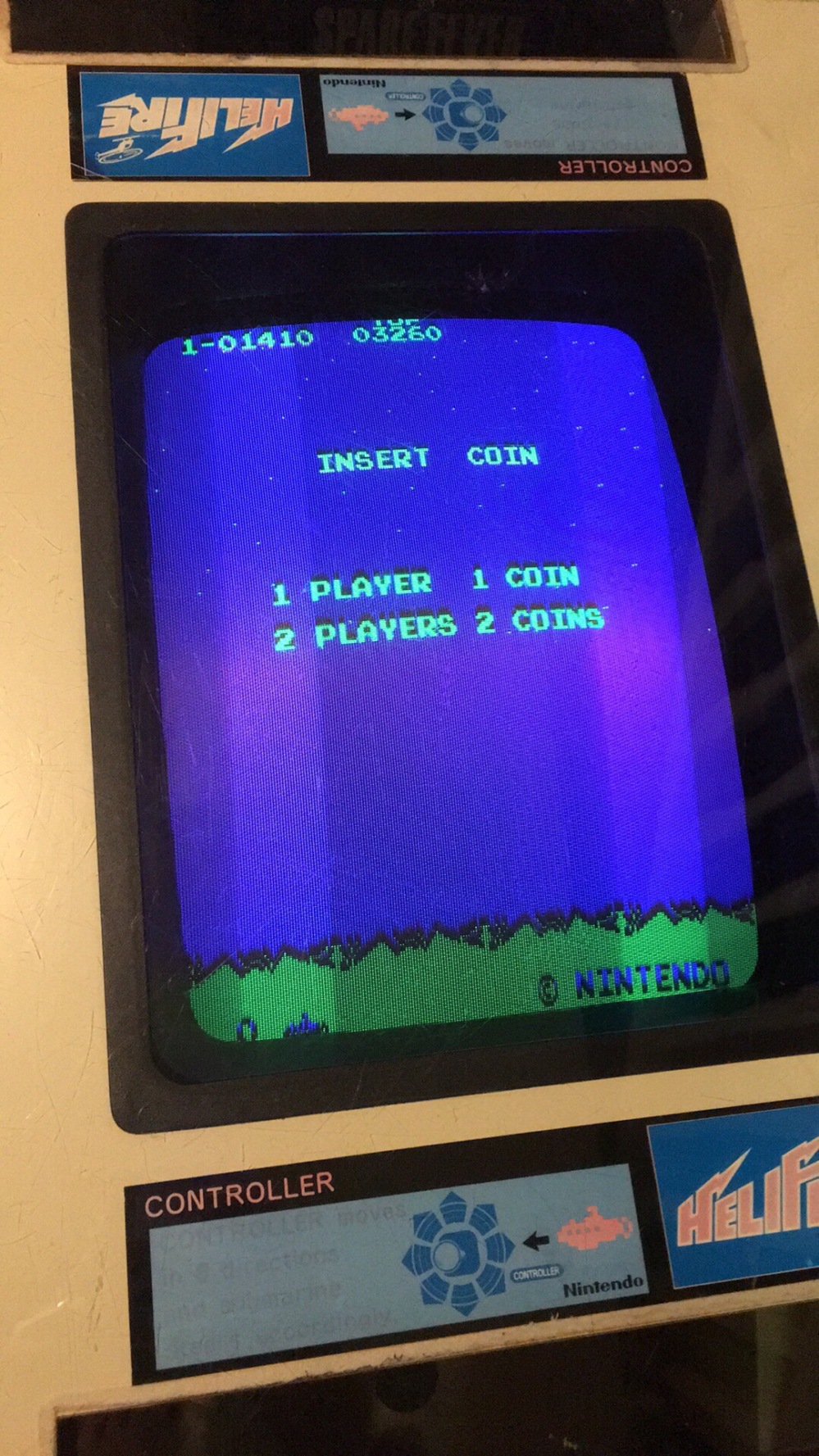 The next day I did some thinking whilst sorting some things out around the house. If the sky was blue and the sea was blue, how would you see the waves anyway. I thought I’d have a quick search online for screenshots to see how it should look. The official flyer showed me that the sky shouldn’t be blue!

So, I need to go back to the red and blue pots to see what I can change. I fired up the cab and was greeted with this:

We had sea! Now I’ve been in the arcade game long enough (and that’s not very long!) to know things don’t just fix themselves. I started making adjustments with the pots and got the screen looking as it should:

This made me very happy! I started playing a few games and was thoroughly enjoying myself. All of a sudden, part way through my second game (I died very quickly in my first!) I noticed the blue sea start to “bleed” into the sky: 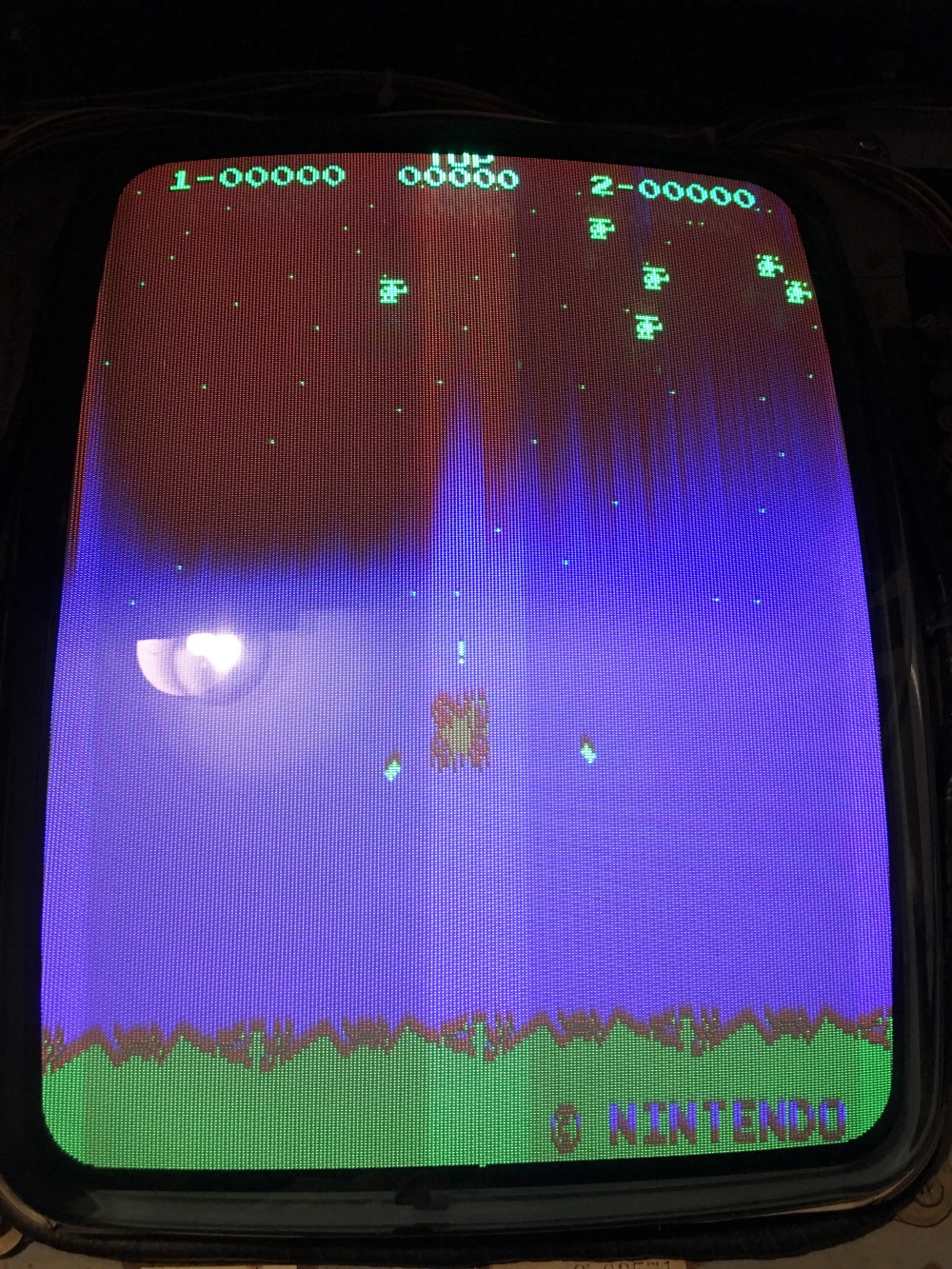 This eventually “bled” all of the red out until I had the screen that I started with. As the colours came back after cycling the power, I pulled the power again and plugged her back in. The red was back and within a few minutes “bled” back out again. Logic suggests that I either have a capacitor failing, or something getting too hot.

So that’s where I got to this time. I think next on the list is to replace all the caps on the ESS board to start the process of elimination. I did look at plugging in the spare ESS board, but the two colour pots are broken and oddly are 300k so not easily sourced. I’ll have a quick scout for 300k pots and see if I can replace those first and try the spare board. In the meantime, the games is fully playable, so I’m going to get some practice in!